How to Choose the Best Stock Music for Your Video

The right stock music can make your videos more compelling and memorable. It can create emotional depth and meaning where there would be none otherwise.

Whether it’s helping sad scenes bring lumps to throats or supporting suspenseful clips that get blood pumping — music is a valuable tool for video marketers. There’s evidence it can even influence buying behavior.

But the inverse is also true: the wrong music can ruin great footage.

At the very least, it can create dissonance and distract from your message. And worst case? It can make your video seem unprofessional, convincing viewers to stop watching.

So what dictates a “good” song in the context of video marketing?

Here are the five steps of choosing the best stock music for your video:

You probably know this, but just to be safe: You can’t put the latest pop single that’s topping the charts in your video. And you can’t use your favorite song on your iPod, either.

Why? Mostly because these songs are copyrighted. You can’t legally use copyrighted songs without the permission of the copyright-holder. And permission — if you can get it at all — won’t be cheap.

Thinking you’ll be sneaky and just use it anyway? I mean is anyone really monitoring this kind of thing? 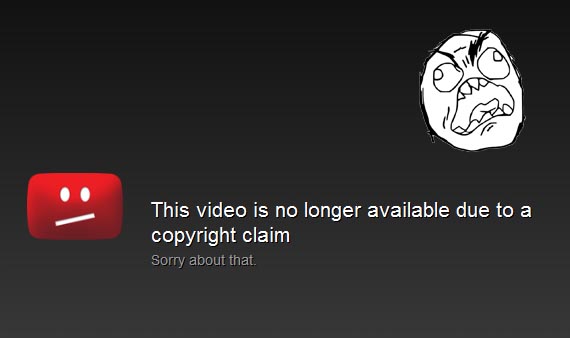 Yep. YouTube and Facebook both have sharp copyright-detection capabilities. So when you upload a video with copyrighted music, it will quickly be flagged and removed, resulting in an experience like the image above.

You’re much better off licensing songs from a stock music library instead.

In video marketing, everything is ultimately about the audience. This includes your choice of music.

So when hunting for the right track, consider your audience. Factors such as age and culture should influence the musical direction of your video. If your ideal viewer is a baby boomer, you might not want to use this electronica track, for example.

In the following video, Apple uses contemporary rock music, likely in attempts to connect with millennials.

Though you may find the most success if you stick to genres that mirror your audience in some way, don’t be afraid to test stereotypes. You may be surprised by what resonates with viewers.

3. Determine the emotion you want to evoke.

As I mentioned before, music is arguably the most effective tool you have when it comes to injecting your videos with all the feels. And for video marketers, getting viewers to feel something is important because emotions drive (purchasing) decisions. It’s only after we make decisions that we rationalize them with logic.

The following example features music that skillfully establishes the video’s emotional tone. Notice how the dramatic grandeur of the song matches that of the footage as the two work together to deliver a potent dose of inspiration:

Once you’ve determined what you want your viewers to feel, search for tracks that embody that emotion. Browsing Music for Makers songs by mood is an easy way to do this. You can sort songs by “inspiring,” “dark,” “playful,” and various other themes.

Pace is also a factor when it comes to conveying emotion. In the video above, a strategic use of musical timing helps build suspense.

Want to slow a scene down? Look for tracks with a lower number of beats per minute (BPM). Or, if you’re trying to communicate energy, seek out something faster, maybe in the 140–200 BPM range.

All Music for Makers songs are free of lyrics and typically free of vocals as well. This is intentional.

Most of the music I create is intended for people who make online videos, which often have dialog or voiceovers while music plays in the background (like in an explainer video).

Background music is usually best when it’s barely noticed (if it’s noticed at all).

That means you’ll want a relatively consistent melody and rhythm — something that gives your video personality without overpowering the message. (“Traveler,” one of my most-downloaded songs, is a good example of an ideal background track.)

When you use a song with vocals, the music competes with the voice talent, making it harder for viewers to comprehend what they’re watching. See what I mean in the following video.

The vocals in that song were a bit distracting, right? Also keep in mind that voice-like instruments, such as trumpet, lead guitar, and piano, may have the same effect.

Another reason to avoid songs with vocals is that when you introduce lyrics into the mix, things get a lot more complicated from a continuity standpoint (e.g., do the lyrics fit the story you’re telling?).

If you must use music with vocals, try to edit the video so that the song vocals and the dialog aren’t heard at the same time. One way to do this is to bookend a shot with music. That means you place a short measure of music in a scene’s beginning and/or end.

Almost anyone can make songs now — regardless of musical skill or talent — thanks to virtual studio technology instrument (VSTi) plugins. And that’s great, in theory.

But here’s the catch: digital instruments can sound low-budget and even corny, especially when used carelessly. They can also make a song feel as if it were mass-produced, almost robotic.

That’s one reason every Music for Makers song features real instruments. Plus, it’s hard to be the warm, organic sound of an acoustic guitar or vintage tube amp — flaws and all — right?