Thomas James “Tom” Kenny (born July 13, 1962) is an American actor, comedian, and singer. He is best known for his long-running role as SpongeBob from the SpongeBob SquarePants series. Kenny has also voiced numerous other characters including Heffer Wolfe in Rocko’s Modern Life, the Ice King in Adventure Time, the Mayor and the Narrator in The Powerpuff Girls, Eduardo in Foster’s Home for Imaginary Friends, Rabbit in Winnie the Pooh, and Spyro from the Spyro the Dragon franchise.

Kenny was born and raised in Syracuse, New York, the son of Theresa Bridget (née Donigan) and Paul Austin Kenny.As a young child, he loved drawing and collecting record albums in the late 1960s and ’70s. He went to Bishop Grimes High School, a Catholic high school, which is also located in Syracuse. He was friends with comedian Bobcat Goldthwait when they were in school after Bobcat got in trouble with one of the teachers in the school, who dragged him into Kenny’s class. The two were friends through school and after college and appeared in films that Bobcat directed and starred in such as Shakes the Clown and World’s Greatest Dad.

While working on the animated series Rocko’s Modern Life, Kenny met marine biologist and animator Stephen Hillenburg, who was also the creative director in the show’s fourth season. Years before the airing of Rocko’s Modern Life, Hillenburg wrote a comic book titled The Intertidal Zone in 1989, and a friend of his told him that he should create an animated series based on the comic book. After trying to find a main character of the show, Hillenburg drew a square sponge, for which he thought it was funny and decided that he has found his character. After the cancellation of Rocko’s Modern Life in 1996, Hillenburg began developing the concept, and hired former Rocko crew members. To voice of the character of SpongeBob, Hillenburg approached Kenny, previously working with him on that series. Originally, the character was to be named SpongeBoy, and the series was to be called SpongeBoy Ahoy!, but these were changed due to trademark issues. After deciding what character can be named, Hillenburg chose the name SpongeBob, and use the name SquarePants as a family name which “had a nice ring to it”.

The series titled premiered on May 1, 1999 on Nickelodeon. In 2000, during its second season, the show became a commercial success. Kenny voices other characters on the show as well: including Gary the Snail, the French narrator (who is parodied as Jacques Cousteau), SpongeBob’s father Harold SquarePants, and his live-action portrayal of Patchy the Pirate (along with Hillenburg, who supplied the voice for the character of Potty the Pirate from 2000 until his departure from the show in 2004). After Hillenburg’s resign, co-executive producer and writer Paul Tibbitt became the voice of Potty. In 2004, a feature film adaptation of the series, The SpongeBob SquarePants Movie, premiered on November 14, 2004, and was officially released in theaters on November 19, 2004. In 2010, Kenny was awarded an Annie Award for “Voice Acting in a Television Production” for his role as SpongeBob in SpongeBob’s Truth or Square (season 6, episode 23-24). Kenny will reprise his role as SpongeBob in the sequel film that will release in early-2015.

Kenny is also a singer and musician and was the lead vocalist for the Syracuse, New York-based band The Tearjerkers since the early 1980s, when he replaced the original vocalist Buddy Love. Other members of The Tearjerkers included Charlie Robbins, Dave DeCirce, and Dave Soule, who is still active in the central New York music scene. “Syracuse Summer” is the group’s best-known song, and is included on The History of Syracuse Music, Volume XII and XIII. While the Tearjerkers did not become a national act, one Tearjerkers roadie would go on to achieve fame: comedian Bobcat Goldthwait. Goldthwait’s film Shakes the Clown features Kenny as Shakes’ bitter archrival. In 1980, Kenny was briefly a member of Syracuse-based pop punk band The Trend along with Goldthwait.

Kenny appeared regularly on NBC’s music video show Friday Night Videos, in a recurring comedic Music News segment. In 1991, he took over as the show’s regular host until being replaced later that year by Frankie Crocker.

Kenny voiced the characters Mozart and Caveman for the title track on the 1998 CD Dexter’s Laboratory: The Musical Time Machine. He sang “Master of Your Fate” for the Teen Titans episode “Bunny Raven or How to Make a Titan Animal Disappear”.

In 2006, Kenny co-wrote and recorded SpongeBob SquarePants: The Best Day Ever with producer Andy Paley. Kenny’s singing on the CD is done in the voice of SpongeBob SquarePants and other characters from the show. Other musical artists on the CD include: Brian Wilson, Tommy Ramone, and Flaco Jiménez. The music pays homage to The Beach Boys, The Archies, The Lovin’ Spoonful, and The Troggs, among others. 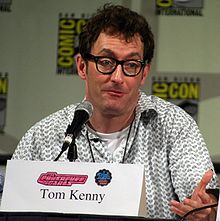 Kenny at the 2008 Comic-Con International

In addition to SpongeBob, Tom Kenny has voiced many characters in over 200 productions. Kenny said that he voices “a lot of sweet yellow characters for some reason.”He described his perspective on SpongeBob’s voice in an interview: “He’s not quite an adult, he’s not quite a kid. Think a Stan Laurel, Jerry Lewis kind of child-man. Kind of like a Munchkin but not quite, kind of like a kid, but not in a Charlie Brown child’s voice on the TV shows.”

He is known to provide the voice of the various meows of Gary the Snail in SpongeBob, but he played his first set of voice actor roles for Rocko’s Modern Life, primarily as Heffer Wolfe. Joe Murray auditioned Kenny for voice acting roles for the series in a casting call in Los Angeles, California. On one occasion, the producers required Kenny to fill the role of Charlie Adler, who was absent. In addition, Kenny had to perform one song and learn how to play another song within ten minutes due to time constraints. He said that this helped him believe that he could stand “toe to toe” with other voice actors. He also voices Cupid for the Nickelodeon show The Fairly OddParents.

Joe Murray chose Kenny for a voice acting position in Camp Lazlo as Lumpus and Slinkman, because Murray, after seeing Kenny’s previous work for Rocko’s Modern Life, felt that Kenny “adds writing to his roles” and “brings so much”.

He was the voice of Dog in CatDog, as well as the voice of Cliff. He also had a few roles in The Powerpuff Girls TV show. He was the Mayor, the Narrator, Mitch Mitchelson, Snake and Little Arturo from the Gangrene Gang, Rainbow the Clown, etc. He voices Eduardo, and various other characters in Foster’s Home For Imaginary Friends. He played Dr. Two-Brains in the PBS Kids show, WordGirl He plays a number of roles in the Transformers Animated TV show. A few of the characters he voices in this series are Starscream and his clones, Isaac Sumdac and Waspinator. Kenny also voiced several characters on the animated show Xiaolin Showdown, as well as the Autobots Skids and Wheelie in the live-action Transformers film series. He has voiced The Penguin on The Batman, as well as Mumbo Jumbo on Teen Titans. On Dilbert, Kenny voiced Ratbert, Asok and other one-time characters. He played Mr. Hal Gibson in the animated kids show Super Robot Monkey Team Hyper Force GO! He is also Yancy Fry and various minor characters on Futurama. He is the voice of The Ice King and Magic Man on Adventure Time.

In 2009, Kenny became a regular cast voice in the Fox comedy series Sit Down, Shut Up. He voices Muhammad Sabeeh “Happy” Fa-ach Nuabar, the secretive custodian who is plotting a terrorist attack, as well as Happy’s interpreter. The series premiered on April 19, 2009. Kenan Thompson, Kristin Chenoweth, Jason Bateman, Nick Kroll, Cheri Oteri, Henry Winkler, Will Arnett, and Will Forte are the other main cast members.

In 2011, Kenny starred as the voice of Rabbit in Winnie the Pooh. He was also the voice of the Best Buy elf from their Christmas TV commercials.

Since 2012, Kenny has been voicing Woody Johnson on Comedy Central’s Brickleberry.

Kenny first met his wife Jill Talley in 1992 while working on The Edge in 1992. The two have since frequently collaborated together on SpongeBob among other works. They have two children, Mack (born c. 1997) and Nora (born August 2003).

Kenny has acted in many films and TV shows, debuting in How I Got Into College (1989) and later he appeared in films such as Shakes The Clown and Comic Book: The Movie. He appeared in sketch comedies The Edge and Mr. Show. He also appeared in the live-action segments of SpongeBob SquarePants as Patchy the Pirate, and appeared on R.L. Stine’s The Haunting Hour on the season four episode, “Uncle Howee” as Uncle Howee, a high-energy kids’ show host with strange powers.

In 2015, Kenny will reprise his role from the television series in the 2015 feature film, SpongeBob SquarePants 2. In 2009, Paul Tibbitt confirmed that “we are doing a sequel to the 2004 film and developing the story”. The film’s executive producer is series’ creator Stephen Hillenburg, who resigned from the show after the previous film’s completion. In 2013, Paramount Pictures confirmed that the sequel film will release on February 13, 2015.