A sound effects technique for synchronous effects or live effects.The Foley techniques are named for Jack Foley, a sound editor at Universal Studios 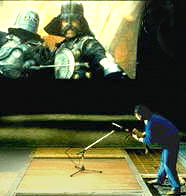 Foleying is an excellent means of supplying the subtle sounds that production mikes often miss. The rustling of clothing and a queak of a saddle when a rider mounts his horse give a scene a touch of realism that is difficult to provide using other effects methods. A steamy sex scene was probably created by a foley artist making dispassionate love to his or her own wrist.

The good Foley artist must “became” the actor with whom they are synching effects or the sounds will lack the necessary realism to be convincing.

Most successful Foley artists are audiles; they can look at an object and imagine what type of sound it can be made to produce.

The foley crew will include the artist or “walker,” who makes the sound, and a technician or two to record and mix it.

A foley stage often appear to be storage areas for the studio’s unwanted junk. Metal laundry tubes are filled to the brim with metal trays, tin pie plates, empty soda cans, hubcaps, bedpans, knives, forks and broken staple guns. These crash tubes are used for anything from comedy crashes to adding presence (brightness and naturalness) to something as serious as a car crash.