What is Phantom Power?

Phantom power, in the context of professional audio equipment, is DC electric power transmitted through microphone cables to operate microphones that contain active electronic circuitry. It is best known as a convenient power source for condenser microphones, though many active direct boxes also use it. The technique is also used in other applications where power supply and signal communication take place over the same wires.

Phantom power supplies are often built into mixing desks, microphone preamplifiers and similar equipment. In addition to powering the circuitry of a microphone, traditional condenser microphones also use phantom power for polarizing the microphone’s transducer element. Three variants of phantom power, called P12, P24 and P48, are defined in the international standard IEC 61938:2013 although it is recommended that only 48 volt systems should be used for new developments. Two specialized variants, P12L and SP48, are mentioned in an informative annex for specialized applications.

Phantom powering consists of a phantom circuit where direct current is applied equally through the two signal lines of a balanced audio connector (in modern equipment, usually an XLR connector). The supply voltage is referenced to the ground pin of the connector (pin 1 of an XLR), which normally is connected to the cable shield or a ground wire in the cable or both. When phantom powering was introduced, one of its advantages was that the same type of balanced, shielded microphone cable that studios were already using for dynamic microphones could be used for condenser microphones. This is in contrast to microphones with vacuum-tube circuitry, most of which require special, multi-conductor cables.

One method of supplying phantom power. A microphone or other device can obtain DC power from either signal line to ground terminal, and two capacitors block this DC from appearing at the output. R1 and R2 should be 6.8k ohms for “P48” 48 volt phantom, and R3 should not be used.

With phantom power, the supply voltage is effectively invisible to balanced microphones that do not use it, which includes most dynamic microphones. A balanced signal consists only of the differences in voltage between two signal lines; phantom powering places the same DC voltage on both signal lines of a balanced connection. This is in marked contrast to another, slightly earlier method of powering known as “parallel powering” or “T-powering” (from the German term Tonaderspeisung), in which DC was overlaid directly onto the signal in differential mode. Connecting a conventional microphone to an input that had parallel powering enabled could very well damage the microphone.

Many mixer boards have a switch for turning phantom power on or off; in most high-end equipment this can be done individually by channel, or on smaller mixers all mic channels can be either on or off, also this can be done in groups in most mid-range boards and some smaller ones. If it is desired to disconnect phantom power from one channel only, this can be done by using a 1:1 isolation transformer or blocking capacitors. Phantom powering can cause equipment malfunction or even damage if used with cables or adapters that connect one side of the input to ground, or if certain equipment other than microphones is connected to it.

Instrument amplifiers rarely provide phantom power. To use equipment requiring it with these amplifiers, a separate power supply must be inserted into the line. These are readily available commercially, or alternatively are one of the easier projects for the amateur electronics constructor.

Phantom powering was used in telephone systems since the introduction of the rotary-dial telephone in 1919 before it was applied to condenser microphones. One such application in the telephone system was to provide a DC signaling path around transformer connected amplifiers in analogue line transmission systems. The first known commercially available phantom-powered microphone was the Schoeps model CMT 20, which came out in 1964, built to the specifications of French radio with 9–12 volt DC phantom power; the positive pole of this powering was grounded. Microphone preamplifiers of the Nagra IV-series tape recorders offered this type of powering as an option for many years and Schoeps continued to support “negative phantom” until the CMT series was discontinued in the mid-1970s, but it is obsolete now.

In 1966, Neumann GmbH of Berlin, Germany, presented a new type of transistorized microphone to the Norwegian Broadcasting Corporation, NRK. Norwegian Radio had requested phantom-powered operation. Since NRK already had 48 V available in their studios for their emergency lighting systems, this voltage was used for powering the new microphones (model KM 84), and is the origin of 48-V phantom power. This arrangement was later standardized in DIN 45596.

The prevailing international standard, IEC 61938, defines 48-volt, 24-volt, and 12-volt phantom powering. The signal conductors are positive, both fed through resistors of equal value (for P48 phantom powering, the standard value is 6.8 kΩ), and the shield is ground. The 6.8 kΩ value is not critical, but the resistors must be matched to within 0.4% or better to maintain good common-mode rejection in the circuit. The 24-volt version of phantom powering, proposed quite a few years after the 12 and 48 V versions, was also included in the DIN standard and is in the IEC standard, but it was never widely adopted by equipment manufacturers. 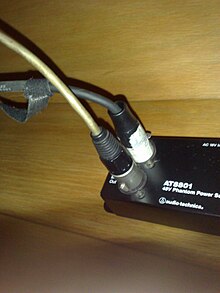 Phantom powering is not always implemented correctly or adequately, even in professional-quality preamps, mixers, and recorders. In part this is because first-generation (late-1960s through mid-1970s) 48-volt phantom-powered condenser microphones had simple circuitry and required only small amounts of operating current (typically less than 1 mA per microphone), so the phantom supply circuits typically built into recorders, mixers, and preamps of that time were designed on the assumption that this current would be adequate. The original DIN 45596 phantom-power specification called for a maximum of 2 mA. This practice has carried forward to the present; many 48-volt phantom power supply circuits, especially in low-cost and portable equipment, simply cannot supply more than 1 or 2 mA total without breaking down. Some circuits also have significant additional resistance in series with the standard pair of supply resistors for each microphone input; this may not affect low-current microphones much, but it can disable microphones that need more current.

Mid-1970s and later condenser microphones designed for 48-volt phantom powering often require much more current (e.g., 2–4 mA for Neumann transformerless microphones, 4–5 mA for the Schoeps CMC (“Colette”) series and Josephson microphones, 5–6 mA for most Shure KSM-series microphones, 8 mA for CAD Equiteks and 10 mA for Earthworks). The IEC standard gives 10 mA as the maximum allowed current per microphone. If its required current is not available, a microphone may still put out a signal, but it cannot deliver its intended level of performance. The specific symptoms vary somewhat, but the most common result will be reduction of the maximum sound-pressure level that the microphone can handle without overload (distortion). Some microphones will also show lower sensitivity (output level for a given sound-pressure level).

Most ground lift switches have the unwanted effect of disconnecting phantom power. There must always be a DC current path between pin 1 of the microphone and the negative side of the 48 volt supply, if power is to reach the microphone’s electronics. Lifting the ground, which is normally pin 1, breaks this path and disables the phantom power supply.

Digital microphones complying with the AES 42 standard may be provided with phantom power at 10 volts, impressed on both audio leads and ground. This supply can furnish up to 250 mA to digital microphones. A keyed variation of the usual XLR connector, the XLD connector, may be used to prevent accidental interchange of analog and digital devices.

T-power, also known as A-B powering or T12, described in DIN 45595, is an alternative to phantom powering that is still widely used in the world of production film sound. Many mixers and recorders intended for that market have a T-power option. Many older Sennheiser and Schoeps microphones use this powering method, although newer recorders and mixers are phasing out this option. Adapter barrels, and dedicated power supplies, are made to accommodate T powered microphones. There is often no audible difference between microphones featuring this method and microphones with P48 powering. In this scheme, 12 volts is applied through 180 ohm resistors between the microphone’s “hot” terminal (XLR pin 2) and the microphone’s “cold” terminal (XLR pin 3). This results in a 12 volt potential difference with significant current capability across pins 2 and 3, which would likely cause permanent damage if applied to a dynamic or ribbon microphone.

Plug-in-power (PiP), is the low-current 3 V to 5 V supply provided at the microphone jack of some consumer equipment, such as portable recorders and computer sound cards. It is also defined in IEC 61938. It is unlike phantom power since it is an unbalanced interface with a low voltage (around +5 volts) connected to the signal conductor with return through the sleeve; the DC power is in common with the audio signal from the microphone. A Capacitor is used to block the DC from subsequent audio frequency circuits. It is often used for powering electret microphones, which will not function without power. It is suitable only for powering microphones specifically designed for use with this type of power supply. Damage may result if these microphones are connected to true (48 V) phantom power through a 3.5 mm to XLR adapter that connects the XLR shield to the 3.5 mm sleeve. Plug-in-power is covered by Japanese standard CP-1203A:2007 A similar line-powering scheme is found in computer sound cards. Both plug-in-power and soundcard power are defined in the second edition of IEC 61938.

These alternative powering schemes are sometimes improperly referred to as “phantom power” and should not be confused with true 48-volt phantom powering described above.

Some condenser microphones can be powered with a 1.5 volt cell contained in a small compartment in the microphone or in an external housing.